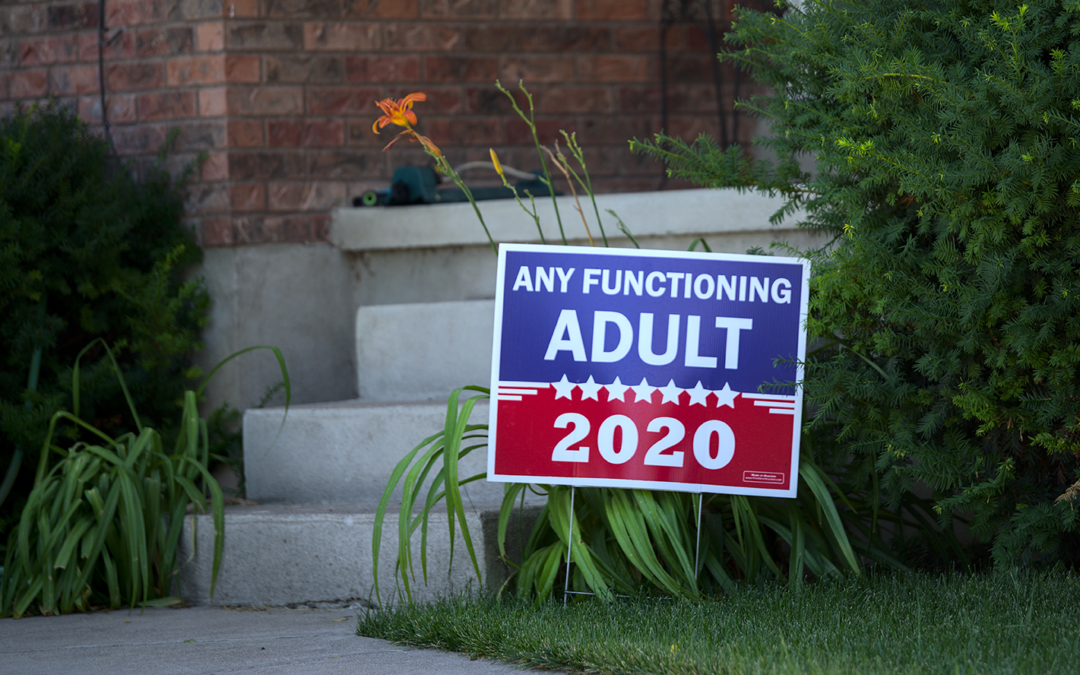 As I drive down my block, I can’t help but notice the latest lawn decor—and I’m not referring to our Halloween enthusiasts next door. Just as the annual “Battle of the Christmas Lights” signals the arrival of the holiday season, so, too, do the excess political yard signs mark the start of election season.

With just over a month until the polls open, these yard signs are popping up like mushrooms, touting campaign slogans and the occasional tongue-in-cheek wisecrack. And like every election cycle, these signs become a sort of political “yellow brick road” to the polls.

In this overly digital world, some question the value of this traditional analog tactic; yet, political signage has deep roots in our country’s political past.

A crash course in campaign history

Yard signs have been the ultimate marker of a candidate’s legitimacy in the U.S. since the 1820s, when John Quincy Adams used the strategy to pull ahead of opponent Andrew Jackson. The printed posters featured a stately image of Adams and the (alleged) slogan, “Like John Adams, but Quincyer!” These were the first semblance of modern political campaigns.

After Adams’ success in 1824, the power of political branding was fully leveraged during the presidential race of 1828, marking the first time election materials such as buttons, slogans and posters were used.

While it wasn’t until the 1960s that our current wire-frame yard signs began appearing (and disappearing: yard sign theft remains a consistent complaint to police), the roots of this sort of political positioning can be found in ancient Rome. Important families there would announce their support for candidates in paint on the front of their homes.

Modern-day campaigns are decidedly more sophisticated, with campaigns spanning everywhere from your front lawn to Facebook. Logos, slogans and color schemes are strategically chosen to represent the face of a candidate’s platform and stand as a testament to the power of political branding. The yard sign is the ultimate culmination of a campaign’s elements.

The power of political branding

Since their first appearance, yard signs have always been a game of scale. The more a candidate’s name is made visible, the stronger the bandwagon effect on voters. While social media ads and campaign commercials are sure to run non-stop as election day approaches, none of these tactics is as tangible as the yard sign when it comes to letting voters know how well-supported a particular campaign is.

In an article from the Chicago Tribune, Johnathon Krasno, a political science professor at Binghamton University, elaborates:

“This is one of the weird things about campaigns. Some of the (work) you can’t really see, but signs are a physical manifestation (of the work). When one of the candidates puts out a ton of lawn signs, what that tells me is that campaign has a lot going on. I don’t know how I’d have known that otherwise.”

Even as social media has become the primary platform in recent years, the yard sign remains the centerpiece of every political campaign. Why? Because they represent the crux of the campaign’s branding. From logos to color schemes, yard signs – and other forms of tactile, printed campaign materials – are a great way to reinforce the primary message of a campaign.

In fact, the power of a single phrase printed on a sign’s minimal real estate cannot be understated. Despite your political leanings, consider the iconic “Yes We Can” slogan of the 2012 Obama campaign. In just three words, the phrase successfully communicated the campaign platform and easily stuck in voters’ minds.

Campaign managers work to cultivate emotions around candidates through their use of snappy slogans like these. Even more than the concrete policies that make up a candidate’s platform, the emotional reaction is what matters at the polls, psychologist Drew Westen argues:

“Two-thirds of voters’ decisions to support one candidate or another could be accounted for by two simple variables: their partisan feelings and their feelings towards the candidates. Candidates’ positions on the issues had only a modest effect on their electoral preferences.”

From John Quincy Adams to the modern-day campaign, printed posters and signs have been political mainstays, reflecting a candidate’s legitimacy and representing our country’s democratic roots.

As election day approaches, one thing is certain: Each campaign represents our country’s right to vote. Left, right or independent, consider each yard sign a reminder to get out and exercise your civic duty.

While this year’s political climate is as charged as ever, Debbie and I are still planning to cast our ballots. (And if you’re in Platte County, you might see Debbie working as an election judge checking you in!)

See you at the polls!

Dan Woehrman is owner of Callender Printing, offering full-service printing capabilities – including letterpress, offset and digital – with union craftsmen quality. Share your thoughts on Facebook or on Twitter @CallenderPrint.